For those of you who know our family well, food is a priority to Brian. I like to think his priorities are God, marriage, food, and beer. Okay, maybe not . . . but you get the picture! We recently spent an entire week in Washington D.C. – partially for Brian’s work but mostly for vacation. We both had never been and knew we’d want to try several local restaurants as much as we wanted to walk the National Mall! Honestly, ALL of our money spent on this vacation was on food . . . no joke. Totally worth it!

– Our first stop immediately once getting off the metro (If you are ever in D.C. USE the metro!) included a small treat . . . of course.

I am that girl that had never tried gelato before; therefore, I was willing to spend over five dollars on two tiny scoops at the highly rated Dolcezza. Let me tell you, it was worth every penny. I ordered a scoop of raspberry lemonade (I believe) sorbetto and a scoop of blueberries & cream gelato. The blueberries & cream was AMAZING. So amazing, even Brian kept trying to steal small bites. It was packed with fresh blueberry flavor mixed with the most creamiest of cream!

– We both love  Asian food including sushi. So when we spotted the small local restaurant, Banana Leaves, we knew we had to try it! I mean the words “sushi” and “bar” in the same sentence sound like heaven to me. 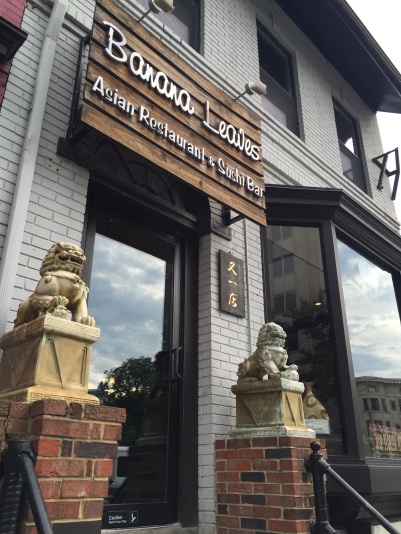 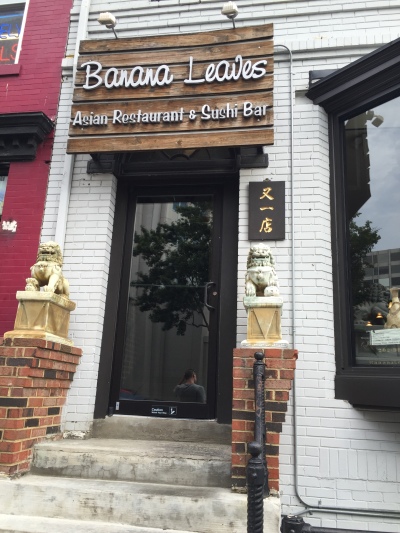 We had a quiet and peaceful dining experience at Banana Leaves that allowed us to have a great view (we sat at the window you see pictured) with perfectly proportioned meals. For an appetizer we ordered their Spicy Crunchy Shrimp Roll that should have been labeled “extra spicy!” Everything is spicy to me and nothing is spicy to Brian. His nose could be running and he would still say his food wasn’t spicy. For dinner, I ordered their Grilled Chicken Teriyaki while Brian ordered their Grilled Steak Teriyaki. We were both pleased with our meals and might have walked to the liquor store next door for our “dessert.” hehehe . . .

– During the next couple of days I spent my time site seeing and walking over eight miles per day while Brian got to “work.” I’d say I definitely got the better of that deal. Being the cake loving girl I am, I knew I had to compare Sprinkles cupcakes with Georgetown Cupcake. I had obviously never had either and was willing to make myself sick trying as many as I could. 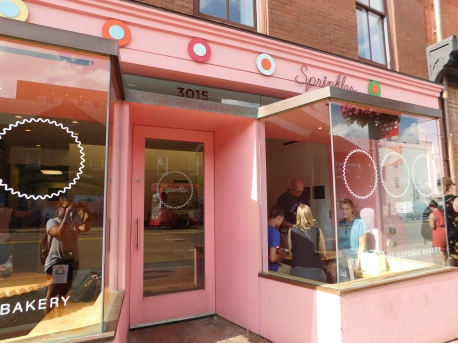 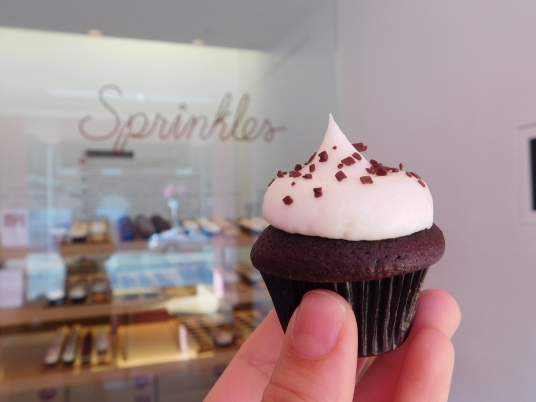 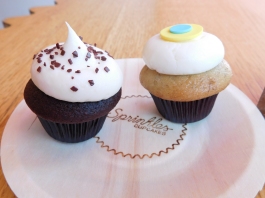 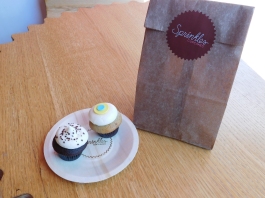 The next day I waited in line (as expected) at Georgetown Cupcake and already had my three flavors to try picked out. 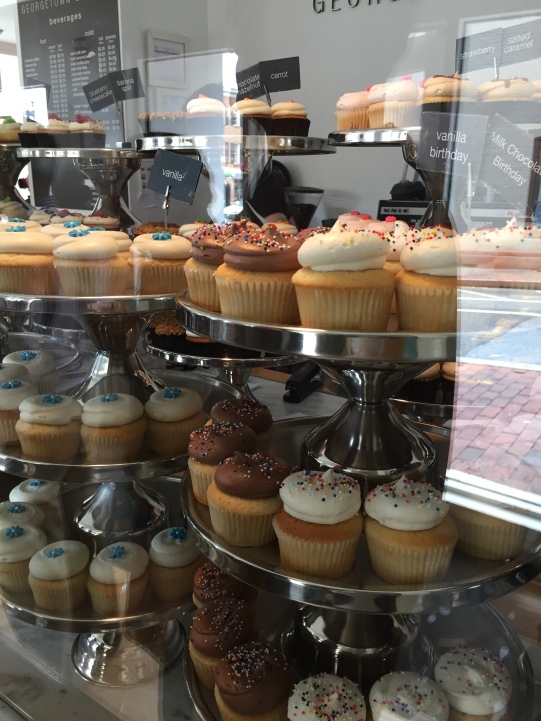 I ordered their Salted Caramel, Blueberry Cheesecake, and of course Red Velvet to compare. I like all cupcakes, but I LOVED their cupcakes. I can honestly say I loved each one, though if I had to rank them I’d say I enjoyed their Blueberry Cheesecake the most, Red Velvet second, and Salted Caramel third. My husband does NOT like cake . . . but I saved half of the Blueberry Cheesecake for him because I knew he’d enjoy it. His half didn’t even last two bites . . . he went back for more the next day but gave up the minute he saw the line to order. I will go back to Georgetown just to stop at Georgetown Cupcake again.

#1 – Their selection was WAY larger than Sprinkles.
#2 – Their cupcakes were way more flavorful and moist!
#3 – They reposted my Instagram photo on their TLC website! 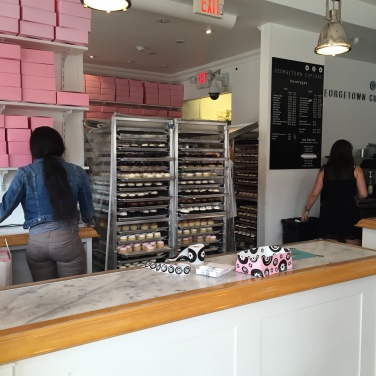 – For lunch one afternoon we stopped at an authentic Greek restaurant called, Zorba’s cafe. Brian has hooked me on greek food lately and their Souvlaki pita sandwich reminded me why! SOOO yummy and fresh! 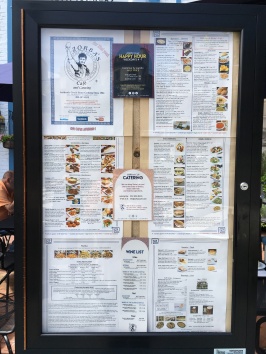 – When Brian and I talk about our favorite foods while in Washington D.C., the following three are what come up most: 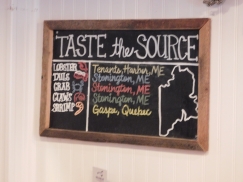 We never turn down fresh seafood. Brian researched what restaurants he wanted to try prior to our arrival and Lukes Lobster was his #1 pick. We enjoyed it so much, we were willing to walk several miles to eat it again a couple of days later but sadly our friends who were with us on our final day didn’t love seafood like we do. We ordered the Noah’s Ark which consisted of two 1/2 lobster rolls, two 1/2 crab rolls, two 1/2 shrimp rolls, 4 crab claws, chips, and drinks. 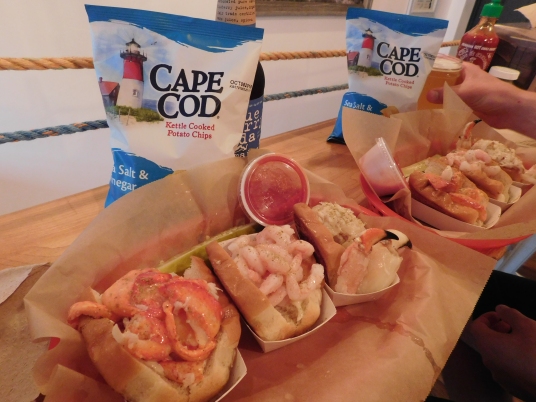 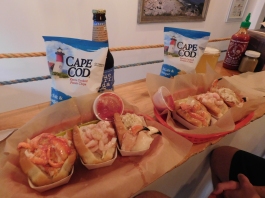 Everything about this meal was PERFECT. The rolls were AMAZING and SO fresh, and even the drinks were spot on! Brian enjoyed a beer on tap while I sipped on the most delicious blueberry soda. My favorite roll was their crab roll while Brian’s favorite was their lobster roll. *This was Brian’s favorite meal of our vacation. 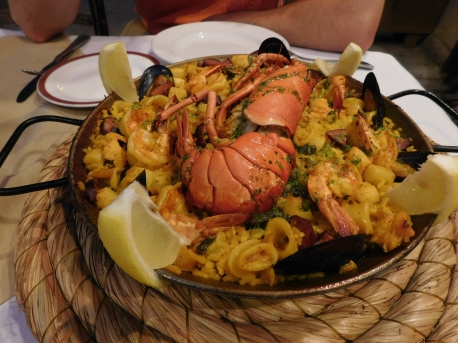 One night we wanted to eat outside and decided to splurge at Madrid Restaurant. We quickly looked at the menu posted outside (most all restaurants in D.C. have their menus posted for the walking public) and knew we wanted to order their Paella Mixta which consisted of calamari, shrimp, scallops, mussels, lobster, chicken, chorizo, and clams. We were told about the long wait for our meal (45 minutes) because of how it was prepared and talked about our home remodel, our travels, our families, and dreams while sipping on the yummiest of sangrias, the Madrid Sangria (red wine, apples, cinnamon, and peach). Every last drop of sangria and every last bite of our paella was gone . . . 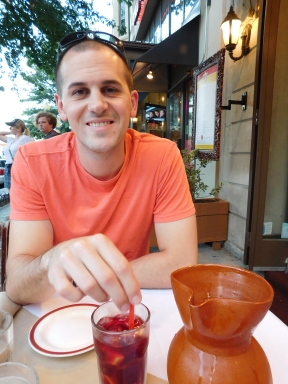 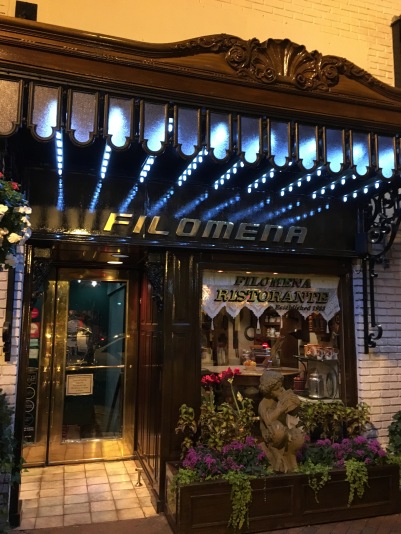 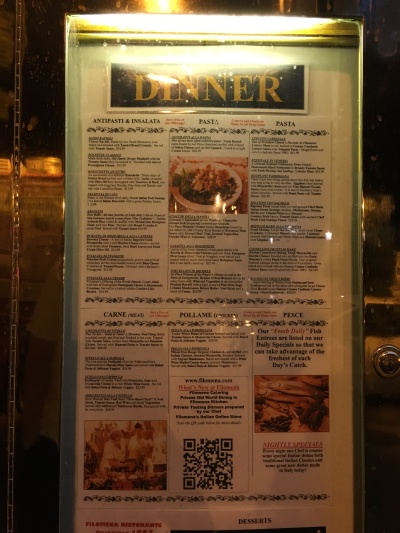 Our night of “fancy” was at Filomena. We were recommended this Italian restaurant from a fellow colleague and were promised to not be disappointed. He even told us their food was better than any food he had in Italy! Instead of making a reservation online we made our two mile long walk to Filomena hoping we’d still be able to get in. They fit us in and quickly sat us at our table. The setting was romantic with dimmed lights and soft music. We realized how popular Filomena truly was after reading their menu which stated which menu item was a favorite to a known celebrity. Brian even had a moment where he squealed a little (okay, not really) when he saw a famous NBA player who is now  a coach eating not far from our table. Of course I do not remember his name now, only his face.

Brian ordered their Rigatoni con Salsicce (supposedly U2 Bono’s favorite dish) while I ordered their Rigatoni con Pollo e Vodka. Not only were our dishes AMAZING, they arrived not even ten minutes after we placed our order. We were so shocked because it wasn’t like they weren’t busy. It was 10:30pm and they were still packed. We both agreed with his colleague and are 100% sure this our #1 favorite Italian restaurant! *This was my favorite meal of our vacation!

My name is Kylie and I am so grateful to have you here! I am an every day wife who absolutely loves marriage, shopping way too much, anything lemon flavored, my book collection, and most importantly loving people.

It is my hope you can find the words here to be real, relatable, and encouraging because that is all I have to offer.

Welcome to my little corner of the world.